Want A Web Site Of Your Own? Sign Up Shop At Peters Web World Store. 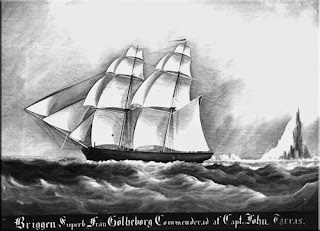 Carl August Wennerbom true story! There are two stories about his first period in Australia. One swedish(told via his letters home and retold for generations) and one australian aslo retold for generations. I have described both of them in The Wennerbom Family History. This is what I believe really happened between the years of 1846 and 1859! Based on the truth, facts and stories told in Sweden and Australia. Could not find a photo of the Creole on the internet. So the photo is the Superb that took my Killberg relatives on their journey between Gothenburg and Philadelphia in 1846.

Charles August Wennerbom attended the higher elementary school in Skara, Sweden, 1846-1848. After his mother, Amalia Mellin, died, he went to sea in 1848 as a seaman. He was at sea for ten years, until he signed up in Liverpool, England, on the ship "Creole" that arrived 14/6 1858 in the port of Adelaide, South Australia, Australia. He jumped the ship, maybe was in jail a short time for this, and then went on foot along the coastline to Robe, South Australia, Australia. Charles then trekked overland through the bush, following the track taken by Chinese immigrants on their way to the Victorian goldfields. He found work as a shepherd on a large sheep station, and later in Penola was able to buy land for vegetable growing in the new settlement of Penola. Here he met and later got married 17/2 1859 to Alison Ellen Balnaves. How about that? Could this be the true story of Charles August Wennerbom? I think so!
Posted by Peter Liliequist at 7:07 AM

Download & listen to our stations in your own media player:

Tune in to Pop And Rock Music Radio on nRadio: