Want A Web Site Of Your Own? Sign Up Shop At Peters Web World Store.

The 1913 Puget Sound Mail obituary of Magnus' wife, Mathilda, claimed that they were the first Scandinavians to settle in this county, another unfortunate attempt at a "first." Pioneers and old-timers were fond of coining firsts and sometimes they just winged it or depended on legend more than checking actual records. John Conrad clarified the claim a bit by noting that Magnus was likely one of the first three Scandinavians to settle in what would become Skagit County. The others were a Finn named Charles Tollber and another Swedish immigrant, C.J. Chilberg. 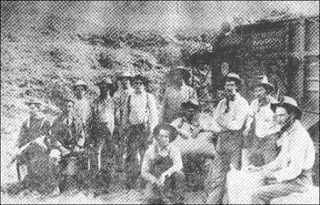 Tollber [also sometimes spelled Tolber], Magnus' fellow ship carpenter from Port Blakely, followed Anderson to the Skagit, took a claim on the North fork, soon sold it and bought other land nearby. Tollber married Anderson's sister [name?? ask Tom] later when she moved out here and Tollber started the ferry across the North fork that was eventually replaced by a bridge. Anderson and Tollber were the only permanent Scandinavian settlers in that area at the time, but that soon changed. C.J. Chilberg seems to have been the next to travel here, sometime in 1869-70. Perry and Paul Polson, C.J. Chilberg and his brother Joseph emigrated from Sweden to Chillicothe, Iowa, and in late 1869 they took the Union Pacific to San Francisco, and then took a steamer to Portland. After crossing the Columbia river, they all walked to Olympia and then took steamboats to Skagit bay. C.J. Chilberg settled on the Beaver Marsh and built a cabin on Pleasant Ridge near Anderson. Later he returned to Chillicothe in 1871 to move his wife and family out to his homestead.

Now we address the cabin, which Anderson constructed very soon after arriving. LaConner author Tom Robinson once again helped us sort through the conflicting information about the early county cabins. He has combed through documents in preparation for his book in progress about the history of western Skagit Valley. He narrowed down the exact location: "the North fork [side of Pleasant Ridge], not far east and above the Landing Road, which leads to the North fork from the Dodge Valley Road. In other words, his original local settlement was on the North fork." 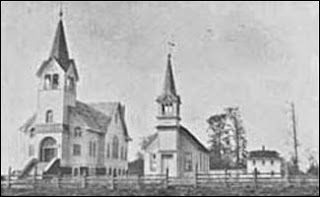 We know when the cabin was moved from the Pleasant Ridge location because Conrad recalled that in 1950, Mrs. Elizabeth Miller, who then owned Anderson's original acreage, donated his 1869 cabin to LaConner's Pioneer Park by the bridge, the scene of the annual Pioneer Association picnic. Although Anderson undoubtedly used the best materials available in 1869, but the decades of wind and rain led to the mortar turning into powder, wood crumbling and iron rusting. Thus the cabin we see today is the result of owners rebuilding the structure more than once, and repairs by volunteers after it was moved to the Pioneer Park and later to downtown LaConner. Upon walking in you can feel how sturdy the logs are and you can sense how it was only large enough for a bachelor.

We tried to trace how Mrs. Miller came to possess the cabin in the first place. Along the way, Robinson discovered some key facts about both the cabin and how it has lasted for almost a century and a half: "Just by chance, a few days after the first article had appeared I met [Don] Summers, who turned out to know the history of the 1869 cabin. I had thought that maybe that first one at some early time had been moved to the Conway area. from Summer I received assurance that the cabin now sitting just below the Town Hall was indeed the one that had been erected in 1869." Summers is still very much alive, with his home on Summers Lane near the Rexville store, a descendant of the very early Samuel Summers family. Mrs. Miller was the daughter of another pioneer family, the Bessners. She married Charles Miller. We know of no family relation between her family and Anderson's, so we infer that she and her husband purchased the original Anderson property from an unknown owner. 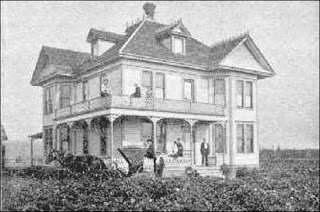 Anderson's skills at carpentry were valuable to other settlers as well, as were his tools, some of which were rare out here in the wilderness, especially in private hands outside of a mill. He made his living largely by building cabins for his neighbors such as Olaf Polson, who moved his family out, including seven other children, from Chillicothe to join his sons in 1871. In Charles Dwelley's book, Skagit Memories, Olaf's son Alfred recalled that his father employed Anderson to build an actual house in 1874 to replace their original cabin near Braun's Slough (later renamed Brown's Slough). "Magnus Anderson, the builder, was a shipbuilder and cabinetmaker and a complete set of tools," Alfred wrote. "Among them was a four-foot plane with a rope attached to the front. It was operated by two men, one pulling and the other pushing." Magnus made a splash in LaConner when he worked with Father Francis X. Prefontaine to build the first LaConner Catholic church in 1872-3. Bishop Augustin Blanchet blessed Sacred Heart church on July 8, 1873.

We learn from the 1906 book, Illustrated History of Skagit and Snohomish Counties [hereafter the 1906 History], that the North fork area (both sides) attracted many other settlers during those early years: "Among the first settlers on the North fork: John Guinea, William Hayes, William Houghton, Joseph Maddox, William Brown, H. A. Wright, Peter [van der] Kuyl [and] Franklyn Buck."

John Conrad provided the details of how Magnus found his wife, who would be his companion for the next 40 years. Mathilda Andersdotter, who was born in Sweden on Oct. 7, 1839, emigrated alone to Chillicothe in 1868. She was a friend of Chilbergs, and she followed them west in 1873. Stopping at their new home in Skagit county, she soon met the bachelor Magnus Anderson and they were married that same year on an unknown date. Mathilda's brother, John Anderson, moved his family to the Skagit valley in 1874 and they brought with them their orphaned nephew from Sweden, Charles Conrad, John's father.
Posted by Peter Liliequist at 12:24 PM

Download & listen to our stations in your own media player:

Tune in to Pop And Rock Music Radio on nRadio: